by C.A. Sharp and Lizette Busquets 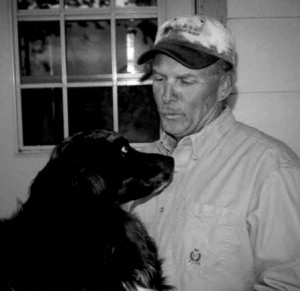 On Christmas Eve 2006, Ray put Blue on the table for his weekly grooming.  When he finished brushing his buddy, Ray gave Blue a quick scruff and a hug.  By chance, he felt the little tumor on Blue’s sternum.

A few days later, Ray and Blue were at the veterinarian’s office.  Ray wasn’t very worried about such a small lump, but he wasn’t taking chances with his heart dog.  The tumor was so tiny Dr. Leone couldn’t find it.  It took Ray ten minutes to locate it in Blue’s dense winter coat to show him.

Dr. Leone decided to do a needle biopsy.  Afterwards, Ray and Blue went to the reception area to await results.  A few minutes later Dr. Leone came out his face somber.  Abnormal cells in the sample made him suspect cancer.  He recommended removing the tumor.  Ray said he’d see the receptionist to schedule the surgery.

Dr. Leone shook his head.  “I think we should do it today.”

Ray left his best buddy in the clinic’s capable hands, but went home with a heavy heart.  Blue’s mother had died of hemangiosarcoma.  A littermate had succumbed to melanoma.  Six close relatives had died of lymphoma.  A week later the pathology report came back from4 the university lab:  Blue had hemangiosarcoma.

The Australian Shepherd Health & Genetics Institute, Inc. (ASHGI) conducted its first health survey, focused on cancer, from January 2006 through January 2007, with follow-up contacts with select respondents made through May of 2007.  There had been two prior general health surveys of the breed:  A small private effort conducted by Leos Kral, PhD, of West Georgia State University in the mid 1990s and a larger project mounted by the DNA & Genetics Committee of the Australian Shepherd Club of America in 1999.  Those surveys and a breed longevity study undertaken by the late John B. Armstrong, PhD, of the University of Ottawa, indicated that cancer might be a more significant issue for Australian Shepherds than was generally realized.  Therefore, ASHGI decided at the time of its formation in 2001 that a cancer-specific survey would be conducted as soon as the organization had grown sufficiently to undertake the effort.

In early 2006, ASHGI contracted with Matrix Canine Research Institute (MCRI) of Shallowater, Texas for technical support.  MCRI’s principal, Scot Dowd, PhD, produced the web version of the survey.  MCRI hosted the survey and maintained the data on their server during the course of the survey.

ASHGI also prepared a paper version of the survey form for those who did not have web access.  The survey was advertised in both the Aussie Times and the Australian Shepherd Journal and heavily promoted on breed discussion lists.

ASHGI’s goal was to determine which cancers, if any, were common in the breed and whether any environmental factors appeared to be significant.  If any types of cancer proved common, it would follow up with a closer examination of those types, seek out researchers and, where necessary, raise funds for research.  While the survey design, by focusing strictly on dogs that had cancer, cannot provide frequency statistics, we feel it did give us a good idea of what cancers Aussie owners and breeders most need to beware of.

The survey was open to any Aussie with cancer, without regard to registry or country of residence.  Response was international.  The great majority of responses came from the United States but 7.3% were from elsewhere.  Over half of those were Canadian and most of the rest were from Europe.  A few came from other parts of the world (Australia, Japan, New Zealand and South Africa.)  Overseas response might have been higher had we been able to mount the survey in multiple languages as most of the non-US countries were either English-speaking or have a significant number of people fluent in the language.

534 dogs were entered in the survey.  Almost all (92%) were considered pets.  Many were active in competitive events (36.7% conformation, 40.3% performance events) with about a third of those dogs active in both.  14.5% of the dogs were stockdogs, 1.3% search-and-rescue, and 6.5% listed various other occupations, including therapy dog. 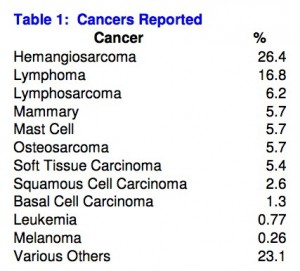 When designing the survey, we developed a list of cancers drawing largely from types known to appear frequently in dogs as a species.  We made sure to include those for which author Sharp had previously acquired data on multiple cases.  The survey results indicated that most cancers were not common enough to indicate a problem specific to our breed, but two stood out:  Hemangiosarcoma and lymphoma.  [See Table 1]  Some of the cancers listed in the “other” category might have fallen into one of the categories named above. However, the respondents either did not remember or did not know the precise diagnosis.  As an example, 11.7% were listed as “liver” and 5.3% were listed as “lung.”  Both sites are common for hemangiosarcoma tumors and primary lung cancer is rare in dogs, so the actual number of dogs with those particular cancers may have been higher.

Average age at diagnosis was 9.2 years, with almost all of the diagnoses being made between 6.4 and 12 years, so cancer in Aussies appears to be largely a disease of middle aged and elderly dogs.  Cancer in juvenile and young adult dogs was rare.  Survival among submitted dogs was poor, with 74.4% of the dogs having died because of the disease.  47.6% dogs suffered from metastatic disease in which the cancer had spread from the primary tumor to other organs.  17.9% were reported as having a period of remission.  [For similar statistics on hemangiosarcoma and lymphoma see Table 2.]

Gender did not appear to be a factor in the development of cancer:  Roughly half the dogs submitted were male and half female. Most (70% dogs, 74.3% bitches) were altered.  Since altering of pet and retired dogs is common, this may not be significant.  However, we will look at altered status and age of altering more closely when doing follow-up on the more common cancers.

When considering the data set as a whole, none of the reported environmental factors appeared to have any correlation with cancer.

The Deadly Duo:  Hemangiosarcoma and Lymphoma

Hemangiosarcoma (26.4%) and lymphoma (16.8%) were reported so frequently that it is probable that these forms are at least partly inherited in the Australian Shepherd.   Information on cancer status of the parents of submitted dogs was not terribly informative as respondents often did not know what the parents had died of or, if it was cancer, they did not know what type.  Even so, 8.9% of the dogs reported with hemangiosarcoma had a parent that suffered from the same cancer.  Family trends in this cancer and lymphoma need further study.

On the research front there are a number of studies underway or planned exploring better diagnostic techniques, improved treatments and the genetic aspects of cancer.  Many studies are specific to a particular breed or group of breeds.  There are none at present that focus on Australian Shepherds, though there are a few that accept any dog with the type of cancer they are targeting.

More investigation of canine cancer is needed.  To encourage additional research, the two major US granting agencies that support canine health research, the AKC Canine Health Foundation and the Morris Animal Foundation, have joined together to support a national canine cancer tissue bank.  This bank will maintain tissue samples from dogs with cancer so they can be available to researchers as the need arises.  The CHF/MAF partnership has already attracted a $1.1 gift from Pfizer Animal Health.

Each organization also provides grants to specific cancer projects.  MAF President/CEO, Patricia N. Olson DVM PhD said, “We are all working well together, on similar issues of great importance and concern, as we should be!”  MAF’s Canine Cancer Campaign will be aimed not only at building the tissue bank, but toward the development of new treatments and preventing cancer through investigation of the environmental and genetic risk factors faced by different breeds.  They have gathered together 14 different veterinary institutions which will work cooperatively on canine cancer issues.  MAF has received a gift of $1 million from the Golden Retriever Foundation for cancer research, with an emphasis on hemangiosarcoma and lymphoma – the same two cancers that we in Aussies most need to worry about.

“We’re proud to partner with these stellar organizations who share our commitment and mission of helping dogs live longer, healthier lives,” said CHF President Wayne Ferguson.  CHF Grants committee member, Dr. Duane Butherus stated, “Canine cancer ranks as the number one natural killer of dogs…We’re proud to sponsor this repository and I’m convinced that it will significantly increase the efficiency and accuracy of cancer research by quickly providing well-characterized tissue samples to researchers.”  CHF has also received a major gift toward this effort from the Laura J. Niles Foundation.

Where do we go from here?

ASHGI will continue to collect data on hemangiosarcoma and lymphoma, seek interested researchers and form alliances with other breeds that have a problem with either of these cancers.  ASHGI has already given $1000 each to MAF and CHF for their recently announced cooperative cancer fund drive.

However, ASHGI can’t work alone.  We need the support of the Aussie community.  People must continue to provide us with information on Aussies with either hemangiosarcoma or lymphoma.  Educate yourselves about these cancers.  When cancer research that addresses our common cancers is identified, support those studies with samples and data.  Contribute to fundraising campaigns for canine cancer.

With luck and quick action, happy endings can happen.  If we focus more time and resources on supporting research into the diagnosis, treatment and genetic origins of cancers, especially hemangiosarcoma and lymphoma, more dogs like Blue may be saved from a terrible death.

Two weeks after Blue’s surgery, Ray noticed swelling at the tumor site.  Soon after, Dr. Leone removed a larger area of tissue from Blue’s chest.  When the pathology report came back, no cancer cells were found in the margins of the sample.

Ray knows the importance of supporting research on this deadly disease.  He has enrolled Blue in a long-range study of hemangiosarcoma being conducted by Colorado State University.  Their preliminary findings indicate that when the hemangiosarcoma tumors develop under the skin and surgery is done before metastasis, the survival rate is high.  Today, almost 8 months after being diagnosed with a cancer that is usually fatal in short order, Ray’s heart dog Blue is still alive and well with no recurrence of the cancer.

Note April 2013:  Blue succumbed to his cancer mid-2009.  While he wasn’t able to beat the disease, early and effective treatment did help him live two and a half years after diagnosis with a disease that often kills in less than two months.

ASHGI would like to thank Scot Dowd of Matrix Canine Research Institution for his efforts on the web version of the survey, and the hundreds of people who took the time to fill out the survey.  We recognize the personal emotional toll those entries represent and the hundreds of dogs whom cancer sent over the bridge.   We quite literally could not have done this without your support.

ASHGI president, C.A. Sharp, tapped Liz Busquets, an Aussie owner and human cancer researcher at the University of Notre Dame, to serve as survey chairperson and perform the statistical analysis.  In addition to Sharp, the committee also included ASHGI board members Kylie Munyard, PhD of Curtin University of Technology, in Australia, and George Johnson, PhD, of Arkansas Tech University, along with Claire Gustafson and Heidi Mobley.  When a draft survey was ready, additional review and comment were provided by Sally Josselyn, Erika Maurer, Lisa McDonald, Kim Monti, and Kristin Rush.  Outside beta testing of the survey format was performed by Charlene Benjamin.