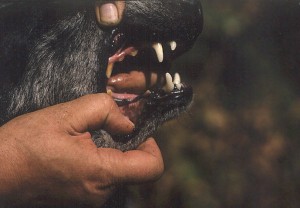 Sometimes Australian Shepherds will lack one or more teeth, usually premolars and occasionally molars.  Sometimes there will be an extra pre-molar or molar.  While absent P1 premolars by themselves don’t impact jaw function significantly, absence of the large upper P4s or multiple teeth diminish a dog’s ability to grip and gnaw.  As a function-based breed that uses its mouth in the course of its work, Aussies should not have missing teeth.

Both the ASCA and AKC standards state that Aussies are to have a full complement of teeth, meaning none missing.  They also both state that teeth missing “by accident” are not to be faulted.  The statement is there so that stockdogs, which risk getting a tooth knocked out in the course of their work, will not be faulted.   The statement should not be used as an excuse, either by breeders or judges, to overlook naturally missing teeth.

Missing teeth were rare in the 1970s and 1980s but have become very common today, perhaps due to too many breeders disregarding the condition.  Inheritance of missing teeth is complex but it is clear that dogs that have missing teeth or which are from lines where missing teeth happen frequently are more likely to produce missing teeth.