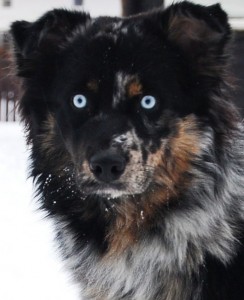 Sometimes Australian Shepherds which are not merle will have blue eyes.  Either or both eyes may be blue.  Sometimes they are half blue/half pigmented.  They are rarely flecked or marbled.  This kind of blue eye has nothing to do with the merle gene, white trim genes or the albino gene (which probably does not exist in dogs).  These eyes are completely sound, though perhaps slightly light sensitive just as blue-eyed people are slightly more light-sensitive than those with brown eyes.  Siberian Huskies are an example of another breed with this type of blue eye.

The mode of inheritance is unknown, but since the blue eyes can be single or a pair and an individual eye may be half-and-half, there probably are either more than one gene involved or there is regulatory DNA that influences the function of the gene(s) that cause this type of blue eye.

Blue-eyed non-merle Aussies are not prone to congenital deafness.   They are sound and are correct as per the breed standards.